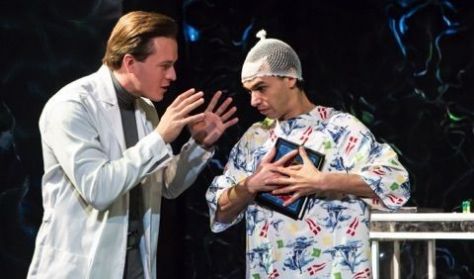 The novel, on which the musical is based, Daniel Keyes' Flowers for Algernon is one of the defining pieces of the young adult fiction genre. It had been translated into 27 languages and sold more than five million copies worldwide.

The story tells the tale of 32 years old, mentally disabled Charlie Gordon, who, although presents like a 6 year old, desperately and gladly joins a medical experiment to become “normal'. And when the procedure succeeds, the man with a low IQ of 70 learns multiple languages, becomes an expert in many areas of science, and even outruns his doctors in carrying out their own research.

Some say that human beings are like complex computers with their brains being their hard drives. However, the experiment that Charlie Gordon participates, and which potentially is one of the landmarks of the human brain-computer parallelism, raises an important question: how far should we go in experimenting on human beings? To what extent should we consider our low-IQ fellow humans as equal, and to what extent can we be held responsible for their lives?

One of the most intriguing stories of the next season, which will come to life on the stage of our Studio Theatre: the story of Algernon, the laboratory mouse, and the rise and fall of low-IQ genius, Charlie Gordon. The result is a tale that offers a recipe for survival, and a parable about us, and about what we are truly capable of...