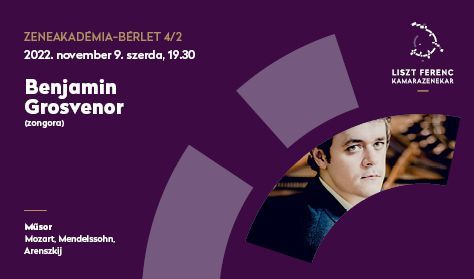 Season ticket Liszt Academy/2
At first glance, one might say that the concert of the Franz Liszt Chamber Orchestra is special in that it is not surprising at all, therefore showing a different organizing principle than what we are used to, seeing the recent activities of the renowned ensemble.

The first part of the concert may truly be considered traditional in many senses, featuring two audience favourites, playing which the orchestra will have to fight hard for success, especially, because of the pieces’ popularity. Following the world’s most famous serenade, Little Night Music, notes of a Mendelssohn concerto will hit the air. The English guest of the ensemble, Benjamin Grosvenor, will perform in Budapest for the first time, after having achieved great success in the most important venues of the international music scene with his sensitive and mature piano playing.

The second part of the concert, however, will offer some peculiarities: with his 1895 string quartet, Anton Stepanovich Arensky broke away from the rules of the genre previously thought to have set in stone, and instead of two violins, a viola and a cello, he created a piece for a violin, a viola and two cellos, attracting considerable critical acclaim. Yet in this way, the magnificent work portrays the lines of force in an unconventional way and performed by the chamber orchestra, the emphasis will shift even more towards the lower registers.

The Müpa Budapest audience can once again enjoy the Hungarian Folk Ensemble's Christmas dance show, which made its debut last year to great acclaim. The performance presents Christmas Eve, the Christmas vigil and the joy and excitement of waiting, the games and traditions of folk origins and the Christian tradition of welcoming the birth of Jesus, as well as the fairytale-like, magical stories which have developed around this day.