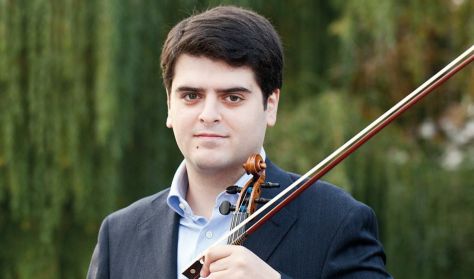 Now in his 80th year, with 71 years of concert performances(!) behind him, the father is one of the greatest musicians of our era: a pianist, conductor and a founder of orchestras and schools. The 37-year-old son is a violinist and, like his father, a globetrotting performer whom the Hungarian audience has already had the chance to hear as a…  more

The father and son duo play a great deal of music together, having come out with several highly successful albums in recent years. However, the two Barenboims, Daniel and Michael, have not yet performed in Budapest together. This concert of chamber works by Mozart promises to be an extraordinary experience.
Family chamber music. This recalls Mozart himself, who played with his loved ones, his father, Leopold, and his sister, Nannerl. The atmosphere will still be a familiar one, even though the Béla Bartók National Concert Hall is more spacious than an 18th-century salon, and the two artists, although belonging to the same family, are two of the leading instrumentalists of our time. However, those who have already heard their performance can attest that, when they play together, there remains something that is unmistakably the sound of family. The directness of the mood, the intimacy of the gestures, the naturalness of the mode of expression - these are qualities that indicate that those who are coming before the audience here and now understand each other's thoughts and the glances of each other's eyes.
Their programme features works by Mozart: three sonatas and a series of variations. The variations are elegant, inventive, eclectic and rich in contradictions of character, and it is no coincidence that the titles of the sonatas reverse the order, compared to later practice, in which the two instruments are listed - these are sonatas for piano and violin - as in these cases the piano often plays a more important role than the string instrument. But we have nothing to fear: the violin also has plenty of work to do - producing a balance in the family chamber music of world class artists.