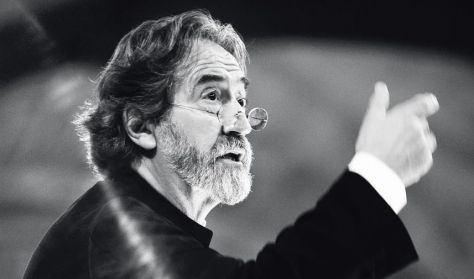 Matthew Locke: The Tempest – incidental musicJean-Féry Rebel: Les élémens – suiteMarin Marais: Alcyone Suite No. 4 (“Airs pour les Matelots et les Tritons”)Antonio Vivaldi: Violin Concerto in F minor (“Winter”), RV 297Georg Philipp Telemann: Water Music (“Hamburg ebb and flood”), TWV 55:C3Jordi Savall is a living legend and an uncrowned king of early music. At his concert with the Budapest Festival Orchestra’s Baroque ensemble, he will spotlight tempests, thunder and water using the energy and astonishing means we have come to expect of him.For centuries, artists have been fascinated by the depiction of storms. This concert will provide a glimpse into the numerous ways in which the theme was addressed in the Baroque, using English, French, Italian and German examples, and genres ranging from opera and dance to purely instrumental music. Matthew Locke, one of the outstanding English composers of the 17th century, wrote instrumental pieces for an opera based on Shakespeare’s The Tempest. Just before the curtain rises, the shockingly effective music captures the audience with full force.Similarly, Jean-Féry Rebel makes an impression with the very first notes of his suite dedicated to the elements and the creation, which some hear as an anticipation of the famous Chaos at the beginning of Haydn’s oratorio. Rebel daringly portrays chaos by using all the notes of the scale at the same time, a dissonance which inevitably calls for the creation of order in the form of a single note. “I have spent my entire professional career since 1965 delving deeper and deeper into the world of the Baroque through the music of Marin Marais,” Savall has said. Marais’s opera Alcyone, written about sailors and gods, and the suite based on it, both culminate in a sea storm.The raging of nature also plays a key role in Vivaldi’s set of concerti entitled The Four Seasons. On this occasion, the concerto “Winter”, will be performed, showcasing everything from the motionless frost to destructive storms (as described in the programmatic titles and sonnets). The concert will conclude on a more peaceful note with Telemann’s Water Music, also known as “Hamburg ebb and flood.” The festive, ten-movement suite pays tribute to water and describes gods and natural wonders.