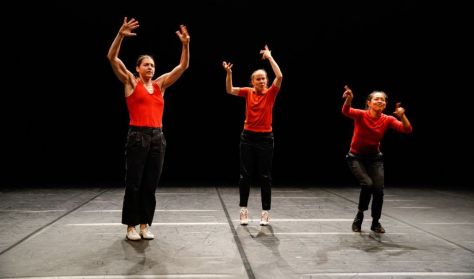 There are as many bodies as there are different roles and perspectives in listening: what hears the musician, the conductor or the spectator when hearing as a result becomes part of an embodied, inevitably visceral experience of movement and sound?
more

This work is a new version of the choreography and concept developed by Xavier le Roy in 2007 for Le sacre du printemps. Having no musical training, Le Roy had ventured into a laborious process of studying a conductor's inter-pretation as if it were a choreography of its own. An inversion of cause and function unfolds: the gestures and the movements that are meant to prompt musicians to play appear at the same time to be produced by the music they are supposed to produce. When is one playing and when is one being played by this highly motile music? What is the moment before and after the sound, the movement, the intention to move, the motorics of the play? How much is our pleasure in listening to music rise in live performance conducted by a desire for, and a trouble about, the synchronicity of a well-functioning machine? There are as many bodies as there are different roles and perspectives in lis-tening: what hears the musician, the conductor or the spectator when hearing as a result becomes part of an embodied, inevitably visceral experience of movement and sound?

For the Biennial of Danza 2016 Xavier Le Roy was invited to present 3 soli, for an evening consisting of : Product of Circumstances (1999), Self Unfinished (1998), Le Sacre du printemps (2007). Unfortunately he fractured his ankle 3 months before the performance and was unable to go on stage in June. Marie Chouinard suggested that he looked for someone to reinterpret these chore-ographies. Each of these pieces having very different qualities and forms from each other, he imagined specific ways of work and re-interpret each piece. This project was planned to be shared among 4 interpreters in order to face the immense task of learning and reinterpreting these 3 solos in such a short time. This project could not be completed due to the impossibility for the chosen interpreters to be available. Aside from Joao Martins who performed Self Unfinished for last year chapter#1 and whose interpretation as well as the re-ception of the work gave us the desire to continue the reinterpretation of the other pieces.

Musical drama in three acts, in German, with Hungarian and English surtitles