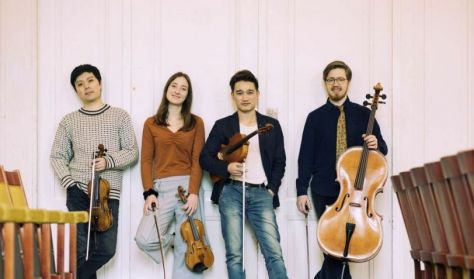 The name says it all - Simply Quartet. The group's history is as unique as their name is catchy. Now you can admire their artistry at one of the thrilling concerts on offer at the Rising Stars Festival. In addition to performances of individual works from Haydn and Bartók, Simply Quartet's appearance in the European Concert Hall Organisation (ECHO)'s concert series promoting young musicians will feature the premiere of an indispensable new contemporary work from the Austrian Julia Lacherstorfer.

Who would have thought that an Austrian-based string quartet would have been founded by four musicians of Chinese origin? Yet that is exactly what happened. Simply Quartet were formed in Shanghai in 2008, before their path led them to the capital of Austria, as Danfeng Shen (violin) and Xiang Lu (viola) were joined by two new members, the Norwegian cellist Ivan Valentin Hollup Roald and the Austrian violinist Antonia Rankersberger. Each of them now lives and studies in Austria, while also finding the time to play concerts and enter competitions. We could spend all day listing all of the venues of their various appearances, from The Concertgebouw in Amsterdam to Rachmaninov Hall in Moscow, not to mention the prizes they have won, from the Quatuors à Bordeaux to the Carl Nielsen International Chamber Music Competition. All the signs suggest that whether we are talking about musical contests or performing on stage, the world is their oyster. One notable feature of the group is the fact that they have played at some truly unusual venues. As guests of the Musethica Festival in Zaragoza, for example, they performed in a school for the disabled, a prison and a homeless shelter - a long way from traditional cultural venues. Naturaly, their engaging openness extends to a keen interest in modern music and the presentation of new pieces, while they have even taken the stage at a children's concert in the company of a beatbox performer.