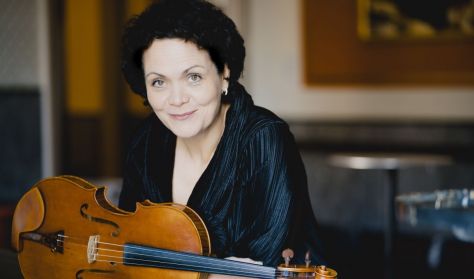 This program of the Festival Orchestra with Tabea Zimmermann draws an arc from German landscapes to Rome, to regions of Hungary and even to the Greek islands.

The program will begin with two extraordinary concertos by Schumann: the first is rendered unique by its unusual solo apparatus, while the cello concerto is characterized by distinctive musical innovations that can be interpreted in many different ways. Performed in the arrangement and with the solo of the German violist world-famous for his musical communication, who is the resident artist of the Berlin Philharmonic Orchestra in season 2020-21, the concerto will be followed by young Debussy’s tale from Rome conjuring up scenes of spring awakening. The colorful program will continue with György Kurtág’s Bartókian Movement for Viola and conclude with the compilation from Ravel’s grandiose ballet.

In Schumann’s extraordinary but rather neglected work, four modern horns – developed around that time – play the solo part, while there are two natural horns in the orchestra. The opening chords of the three-movement concert piece immediately lead the audience into German forests and landscapes. After the first movement and the moody romance, the piece ends with a rhythmic finale.

Konzertstück (Concert Piece) – this is the title of both the composition for four horns and the cello concerto. In the latter’s case, Schumann also added: “Concert Piece for Cello with Orchestral Accompaniment” The composition, which was for a long time attributed to a disturbed mind but is now rather linked to Schumann’s late style, is more dominated by lyrical monologues than virtuosity. Due to its high register, the cello part literally cries out for an arrangement for viola, which was made in 2018.
In 1885, Debussy received a four-year scholarship in Rome. While staying there, he was obliged to annually send a composition to the Academy of Fine Arts in Paris. The committee deemed Printemps (1887) colorful but too modern and that was when the word “impressionism” was first used about Debussy’s music. The symphonic suite sets to music without actual melodies the awakening and blossoming of nature, using only a variety of moods.

György Kurtág gained worldwide fame with the unmistakably unique style of his musical miniatures. However, before learning about contemporary Western music in Paris, he had a creative period at home. The final piece of that period was his Viola Concerto, where Kurtág paid tribute to Bartók’s late style and which won him the Erkel Prize in 1954. The work’s tranquil, lyrical first movement is often performed also as a single concert piece.

Ravel spent three years composing one of his greatest masterpieces, the ballet Daphnis et Chloé telling the story of an ancient Greek pastoral romance. Today, the “choreographic symphony” using several percussionists, as well as a chorus, is more popular in the form of the suites compiled by the composer. Suite No. 2 includes the famous Daybreak scene, the Pantomime telling the story of Pan and Syrinx, and the wild and carefree dance movement concluding the piece.