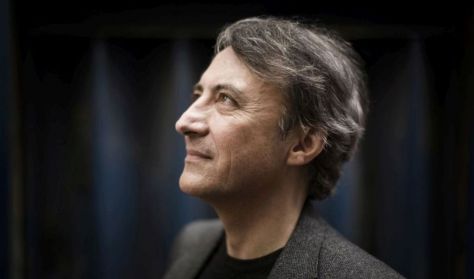 The French conductor Louis Langrée returns to the pulpit of BFO with a French program, performing the music of two prominent composers of the turn of the 19th and 20th centuries, Ravel and Saint-Saëns.
more

The music director of both the New York Mostly Mozart Festival and the Cincinnati Symphony Orchestra is to conduct an orchestral suite (grown from a piano piece) and a symphony including an organ part, and, between the two, one of the most significant 20th century piano concertos. The soloist of the latter is the conductor’s compatriot, Jean-Efflam Bavouzet, who has already played concertos by Bartók and Mozart with the Festival Orchestra. This is what The Financial Times wrote about him: “He makes you listen to music as if you are discovering it Eureka!-style: yes, that’s what the composer must have meant!”

The circle of artists called The Apaches frequently met at the home of Ida and Cipa Godebski. Ravel had a knack for treating children, and, as an eccentric, had a tendency to flee the company of adults and visit the room of the Godebski kids, Jean and Mimie. There he told stories to the siblings. These stories soon inspired the composer to write a series of piano duets, later turning them into ballet music and an orchestral suite. In the Mother Goose series, the first movement is a slow Spanish dance, the Pavane of the Sleeping Beauty, followed by Tom Thumb and the pentatonic melody of the Little Ugly Girl, the Empress of the Pagodas. The Conversation of the Beauty and the Beast takes the form of a slow waltz while The Fairy Garden consists of a single upping.

Although the Austrian pianist Paul Wittgenstein lost his right arm in World War I, he did not give up his vocation. He commissioned pieces for the left hand from the best composers of the time, including Ravel. Mother Goose was completed by 1931. Wittgenstein arbitrarily rewrote several parts and the relationship between composer and performer grew cold, despite the pianist’s later return to Ravel’s score. Composed for the left hand but sounding like any piano piece for both hands, the concerto consists of a single movement that can be segmented into several parts. It is full of jazzy components but is characterized by gloominess and tragic overtones.

After the interval, the orchestra performs Saint-Saëns’ last symphony. “I gave everything I was able to give to it. What I have accomplished here, I will never achieve again,” wrote the composer after the 1886 London premiere of the work. Those days he was equally popular in England as a conductor, pianist and composer. He was commissioned by the Philharmonic Society of London and he chose C minor as the key – a key that was made iconic by Beethoven and Brahms – though the symphony begins with grand C major chords. Saint-Saëns used the thematic transformation technique known from the music of Liszt and Berlioz; that is, he applies his motto resembling the Dies irae motif in different forms throughout the two movements (four parts) of the composition. Saint-Saëns dedicated the symphony, complete with piano and organ, to the memory of Liszt.

For more than two centuries after they were written, Johann Sebastian Bach's cello suites attracted no interest at all. It…