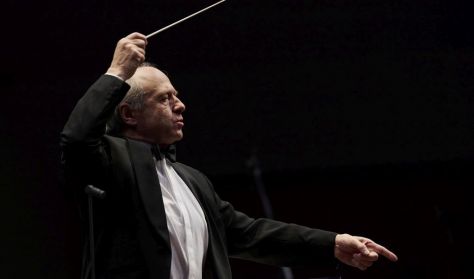 “It is music coming from another world; it is coming from eternity.” These are Herbert von Karajan’s words on Mahler’s 9th Symphony. Indeed, the work, lasting almost an hour and a half, creates a very special atmosphere.  more

This is the last score the composer finished; still, we cannot say for sure if he was saying farewell to life as he started working on his 10th almost immediately and with the same vigor. It is indisputable, however, that the subject of the symphony is death: its mournful, grotesque, beautiful, and redemptory sides alike. The gigantic first movement begins innocently but intensifies into cacophony; this is followed by a movement put together from dances: folksy ländler and waltz. Then comes Mahler’s most modern music, the Rondo-Burlesque, and, finally, the vision of the afterworld; its ethereal sound closing the solemn and touching work.

“Ninth symphony.” Number and genre both bring Beethoven’s last symphony to mind – and to the minds of composers in the 19th and 20th century as well. Mahler dreaded the ominous number but his urge to compose got the better of his superstition. In 1907 he was diagnosed with heart problems, and he lost his four-year-old daughter too, causing him an incurable trauma. Despite all that he remained active, both as conductor and composer. He spent his summers in the Tyrolean mountains where he produced his Das Lied von der Erde, Symphony No. 9 and a movement for his Symphony No. 10 – these three are often referred to as a trilogy – none of which was performed in Mahler’s lifetime.

According to Alban Berg, the almost twenty-five-minute-long opening movement is Mahler’s “most wonderful” piece of music: “It is the expression of tremendous love for this earth, the longing to live upon it in peace, to enjoy nature to its greatest depths – before death comes.” All this starting out from a four-note motif that swells into devastating fury, and scored as sometimes resigned, sometimes desperate music.

When recalling cheap, popular dances, the second movement probably mocks the senselessness of life. The tunes of the sweet, close-to-nature ländler are interrupted by increasingly reckless episodes of waltz. The movement ends in the ländler’s motif in a special orchestration.
While the second movement suspends the representation of darkness and can be called calm, the next one breaks in with resolute vigor, the satanic music radiating ill-balance, violence, and tension – it is a Scherzo only in name; properly weighed, it is more like a Finale. The defiant dash is interrupted only once with a transcendental section.

The real Finale comes as slow, understated music. A hymnic atmosphere, bitter acceptance, passion, and thought-provoking ideas characterize the movement, lasting almost half an hour. This music is also full of darkness, yet the symphony settles with the soft sounds of solace: ethereally high-pitched violin notes evoke the sunshine appearing over the distant hills in Kindertotenlieder.