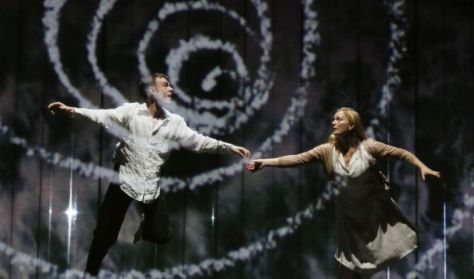 This will be the sixth time Die Zauberflöte is being featured as part of the Met's live HD broadcast programme, this time in a new production by Simon McBurney, which replaces Julie Taymor memorably successful version.

This will be the sixth time Die Zauberflöte is being featured as part of the Met's live HD broadcast programme, this time in a new production by Simon McBurney, which replaces Julie Taymor memorably successful version. Conducting this broadcasted performance, which also features acrobats, will be Nathalie Stutzmann, who is also well versed in The Magic Flute as a singer, while in the lead roles we'll have the American tenor Lawrence Brownlee and his amazing high notes joined by his countrywoman Kathryn Lewek, a coloratura soprano with a similarly intimate relationship with the upper register.

Because it is the first work with which children gain familiarity with the genre of opera and the medium of opera performance, as well as because of its cryptic system of symbols, this masterpiece has inspired the widest imaginable crop of ideas from academic analysts. Often criticised for its silly plot, the fairy tale opera is an enigma of a musical stage richly furnished with symbolism related to freemasonry and the Enlightenment. All of this can be said of Mozart's final opera, which remained unscathed even by its prose dialogues. The work of the English director Simon McBurney, whose production is being transplanted from London to New York, is of course not without stakes either, as the eternal popularity of the parts can only increase our interest in the singers' dramatic portrayals, such as the enchanting Erin Morley's Pamina and the Dane Stephen Milling's imposing Sarastro. Or, as the debut of the Dutch baritone Thomas Oliemans, who is skilled in physical humour, promises to the local and global audience, as he will be wearing a far from traditional bird-catcher's costume this time as a true Papageno specialist.

The 'Metropolitan Opera Live in HD' transmissions have been made possible through the cooperation of our partner, liveincinema.eu s.r.o.

The Queen of the Night: Kathryn Lewek