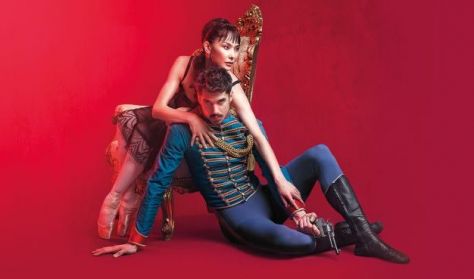 Kenneth MacMillan's fourth full-length ballet relates the tragic story of the heir to the Austrian throne and his mistress. The choreographer's treatment of the 1889 double suicide of Crown Prince Rudolf and Mary Vetsera in light of the social, political and personal pressures that beset the two protagonists resulted in an extraordinarily shocking work, one widely considered to be his most outstanding. John Lanchbery selected the music for the ballet from the oeuvre of a Hungarian composer whose world renown led to his creating work for Empress and Queen Elisabeth (Sisi). The role of Rudolf is one of the most challenging in the history of ballet, with the crown prince's psychological and emotional collapse depicted through two exceptionally intense pas de deux.
With Mayerling, MacMillan broke with 19th-century conventions and created a ballet that better matched the harsher realism of our time.

Synopsis
We still do not know today with utter certainty what actually happened on that freezing January morning in the Mayerling Castle hidden in the Vienna Woods, probably because all evidences related to the death of the two lovers were erased with the greatest care by the imperial court. Was it a romantic suicide? Could it have been a drunk fight, or did the heir apparent to the throne of Austria-Hungary and his lover, Mary Vetsera fall victim to a political assassination driven by dark intentions? The broken political marriage of Crown Prince Rudolf and Princess Stephanie of Belgium, the liberal views of the prince, his constant conflicts with his father, Emperor Franz Joseph, and feeling unloved by his mother certainly all contributed to the tragic ending of Mayerling. The journals and letters paint a picture of a bohemian, fickle, often insolent crown prince, whom they wanted to force to leave a young girl obsessed with him so much that she was willing to give up her life for this love.

Prologue: Heiligenkreuz cemetery, near Mayerling (before sunrise on 31 January 1889)
A young girl is being secretly buried in the dark night in a cemetery next to a church standing alone. This burial is part of a scheme to save the Habsburg dynasty from scandal and protect the honour of the royal family that has been ruling for over 600 years.
Act One
Scene 1 – Imperial Palace in Vienna, Hofburg Ballroom, 1881
At the ball celebrating the marriage of Crown Prince Rudolf and Princess Stephanie of Belgium the young prince shocks the court and offends his parents and his bride by openly flirting with Stephanie’s sister, Princess Louise. When left alone after the scandalous scene, Rudolf meets his former lover, Countess Larisch and Baroness Vetsera, who introduces her youngest daughter, Mary to him. The meeting is interrupted by four Hungarian officers. Rudolf talks with them. The double-headed eagle of the royal arms of Habsburg symbolize that the family oversees the territories East and West of Vienna. But the Hungarians demand independence. After the departure of the officers, Countess Larisch takes advantage of Rudolph left alone, and she evokes their mutual past. The scene is witnessed by Prime Minister Count Taaffe, one of the greatest adversaries of Rudolph, who reports it to the emperor. The countess kissing Rudolph is seen by Franz Joseph, and everyone leaves shocked.

Scene 2 – The suite of Empress Elisabeth in the Hofburg Palace
Empress and Queen Elisabeth (Sisi) has left the ball and passes time with her ladies-in-waiting. Rudolf visits her before going to his young bride, hoping to get some sympathy for his unhappiness over the forced marriage.

Scene 3 – The suite of Crown Prince Rudolf in Hofburg
The disillusioned Princess Stephanie lets her servants go as she prepares for her wedding night. Rudolf plays a vicious joke on his shy wife: he scares her to death with a revolver.

Act Two
Scene 1 – A dreary, notorious tavern in Vienna
A few years later, Rudolf and Stephanie enter a tavern in disguise, accompanied by Bratfisch, Rudolf’s loyal driver. Seeing the bad mood of Stephanie, Bratfisch tries everything to make her smile. There is growing merriment among the new arrivals, and Stephanie leaves the tavern in the end. Rudolf only pays attention to his lover, Mitzi Kaspar and his Hungarian friends. At the height of the party the police raid the tavern, and Rudolf, Mitzi and the Hungarians hide. After a few arrests, the police leave the place. Rudolf, despairing because of the constant surveillance, proposes to Mitzi that they should kill themselves together. Count Taaffe enters the tavern after he is notified that Rudolf is there. Rudolf hides again, but Mitzi, having been threatened by Count Taaffe, exposes him and hands over an anti-imperialist leaflet to the count, with whom she then leaves.

Scene 2 – In front of the tavern
As Rudolf says goodbye to his friends, Countess Larisch recognizes him and introduces to him Mary Vetsera, who is now a young lady.

Scene 3 – The residence of Baroness Vetsera
Mary is admiring the portrait of Rudolf fully mesmerized when Countess Larisch visits them on the invitation of Baroness Vetsera. The countess tells Mary’s fortune from a pack of cards she cheats with, and promises her that her romantic dreams will come true. The girl in love writes a letter to the crown prince.

Scene 4 – Hofburg
At the celebration of the emperor’s birthday, Count Taaffe confronts Rudolf about the pamphlet, who sneers at his threats. Elisabeth presents the emperor with a painting of his lover, Katherina Schratt.
The guests go outside to admire the fireworks, leaving Elisabeth and Middleton alone. Rudolf discovers their intimate connection and kisses, which makes him bitterly angry. Rudolf is deeply disturbed by the infidelity of his mother, but Countess Larisch cheers him up by handing Mary’s letter to him.

Scene 5 – The suite of Crown Prince Rudolf in Hofburg
Mary and Rudolf meet in secret for the first time. During their passionate encounter, they talk about death several times.

Act Three
Scene 1 – A royal shoot in the countryside near Vienna in January 1889
The emperor’s family and guests go on a hunting expedition. The beautiful day turns into scandal, because Rudolf unaccountably pulls the trigger, the gun fires in his hand, the bullet kills a courtier and almost injures the emperor.

Scene 2 – The suite of Crown Prince Rudolf in Hofburg
The empress discovers Rudolf’s tête-à-tête with Countess Larisch, and sends the countess away. She does not know that Mary is waiting outside. Mary enters the suite to meet Rudolf, who begs the girl to die with him.

Scene 3 – The Mayerling hunting lodge on 30 January 1889
Rudolf tells his hunting fellows, Count Hoyos and Prince Coburg that he is unwell and would like to rest alone. His friends leave. Bratfisch enters with Mary. Rudolf tells him to entertain them, but when Bratfisch doesn’t succeed, he is ordered to leave. Rudolf is overwhelmed by feverish passions in the Mayerling hunting lodge; he wildly makes love to Mary, then he calms his strained nerves by injecting morphine. He embraces Mary one last time before he shoots her. Hoyos, Coburg and the valet Loschek rush in when they hear the noise, but the upset prince dismisses them. When he is left alone, he kills himself too.

Epilogue: Heiligenkreuz cemetery, near Mayerling (before sunrise on 31 January 1889)
A young girl is being secretly buried in the dark night in a cemetery next to a church standing alone.