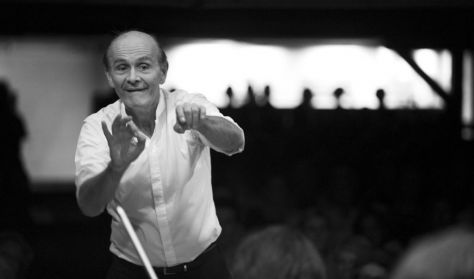 When the Festival Orchestra announces works by Haydn and Mozart in its program, the experienced concert-goer immediately knows: Gábor Takács-Nagy is getting ready for another unforgettable concert.

Music of the masters of Viennese classicism always sound full of vitality, freshness, and wit under the baton of the Prima Primissima laureate conductor. Instead of their usual cheerfulness, both Haydn’s first Sturm und Drang orchestral work and Mozart’s surprisingly serious and profound “Prague” symphony represent a darker and more tense atmosphere, in minor keys. In between these symphonies, we will have sunshine: two outstanding violinists of the BFO who collected a special prize at the Sándor Végh Competition in 2021, Emese Gulyás and Péter Kostyál, who is at home with chamber music as well and often plays the viola, perform the solo parts of an exhilarating musical dialogue before the intermission.

The exact date being uncertain, the G minor symphony is probably the first among Haydn’s serious pieces in a minor key. Around 1765, the composer already had the entire orchestra of the Esterházy court at his disposal, so, making use of a larger roster of musicians, he scored the piece for four horns instead of the usual two. The symphony begins with hushed whispers and the uneasy feeling is enhanced by the unexpectedly inserted general pauses – after these, the orchestral tutti almost comes as a shock. The slow movement, scored for strings only, eases the tension but the Minuet, its jolly Trio aside, casts a gloomy atmosphere again. The energetic, buoyant Finale is full of contrasts, exciting effects, and agitation.

Wishing to escape from Salzburg, Mozart was hungry for the fashions of the wider world. He became acquainted with the genre of the sinfonia concertante on his trip to Mannheim and Paris, the thing being a mixture of symphony and concerto, putting the soloists and the diverse instrumental settings into the limelight. In his current piece from 1779, violin and viola are absolutely equal partners, not just in their solos but, thanks to the divided viola parts, in the orchestra as well. The opening movement, teeming with musical motifs, is followed by an enchanting slow movement in which the plaintive aria of the violin is comforted by the viola. The rumbustious, joyful closing part is full of unexpected events.
After Salzburg, Mozart couldn’t find permanent success in Vienna either. The Marriage of Figaro had a mixed reception, though its composer was most warmly welcomed in Prague. Mozart, who traveled to the Czech capital to conduct his opera, also gave a concert presenting his Symphony in D major and it was adored by the audience. Although contemporary formal requirements demanded a Minuet as one of the movements of a symphony, it is not to be found in Mozart’s opus. The three-movement work of an uncommon size begins with a slow introduction, anticipating the drama in Don Giovanni. Together with the complex main part, this music is characterized by sudden dark episodes in minor keys. After the sensual beauty of the slow movement’s profound song, a bright Finale winds up the symphony, in which a possible tragedy is always lurking.

Directed by artistic director Bence Vági, Solus Amor employs "cirque danse”, a genre created with and by the company over the course of several years, in a monumental production drawing its power from our contemporary yearning for nature and wonderment.