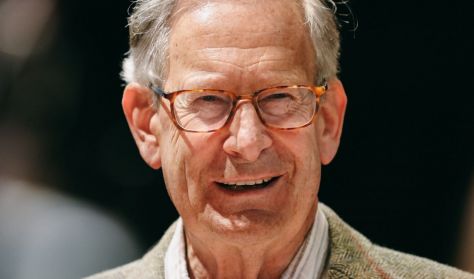 Sir John Eliot Gardiner is one of the greatest conductors of our time and a specialist in the area of the historically informed performance of music by composers such as Monteverdi, Bach, Mozart and Beethoven.

An "omnivore" of a musician, he conducts ensembles employing modern instruments as well, with a repertoire that extends to works by Schumann, Brahms, Berlioz, Massenet, Bizet and Ravel. The three great achievements of his life are the three ensembles he founded and went on to lead: the Monteverdi Choir, the English Baroque Soloists and the Orchestre Révolutionnaire et Romantique. Of these three, it will be the English Baroque Soloists who will accompany him to Müpa Budapest to delight in the celebrations surrounding the conductor's 80th birthday with a programme of Haydn and Mozart.

John Eliot Gardiner is considered one of the pivotal Bach conductors of our time, but anyone who has ever heard Monteverdi's Vespro della Beata Vergine, Beethoven's symphonies, or Brahms's German Requiem being performed under his baton needs no convincing of his versatility. Although one of the important features of his music is its depth, another is the energy and exceptionally strong emotional content he brings to it. The Monteverdi Orchestra, which played on modern instruments, switched to copies of period instruments in 1978, when they also changed their name to the English Baroque Soloists and started to gain fame for their simultaneously perfect and evocative interpretations. Between the sophistication and wit of a late Haydn symphony and a mature one by Mozart, their current programme offers the personal poetry of Mozart's unforgettably lyrical sinfonia concertante for violin and viola. The two soloists, violinist Isabelle Faust and viola player Antoine Tamesti, are two of the finest string players of our time, with an artistic magnitude appropriate for appearing with Gardiner. We can count on them to bring all the richness and beauty of this exceptional work to the surface.

Countertenor Kangmin Justin Kim might as well have come from a K-pop band: to his extravagant, cheeky style is added…