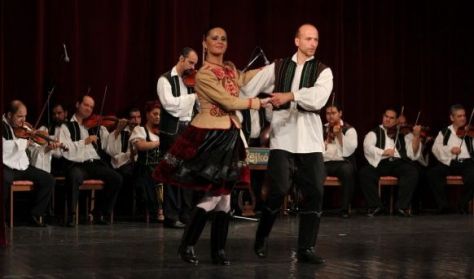 The world famous Rajkó Folk Ensemble and Orschestra's work is based on decades old musical and dance traditions. The ensemble was founded by gipsy musicians, their gift is the inherited traditions of century old gipsy artists.

There is no better way to discover a country’s soul than learning about its authentic dance and music traditions. Hungary is a country known for its passion for the art of folk dances. It’s one of only a few countries in the world where exist University for folk dances and also four professional folk dance groups.

Our show is brought to you by three of them with longest traditions. The world famous Hungarian State Folk Ensemble, the Rajkó Folk Ensemble and Orchestra and the Danube Folk Ensemble were founded in 1950, 1952 and 1957.

Ensembles consist of 8 dance couples and an folk orchestra and their aim is to preserve and show Hungarian traditions through original choreographies dating centuries back.

The Folk Show is organised in the historic golden theatre hall of the Neo-Baroque Danube Palace, located in heart of Budapest. Each performance starts at 20:00, and consists of two 40-45-minute sessions with a break in between.