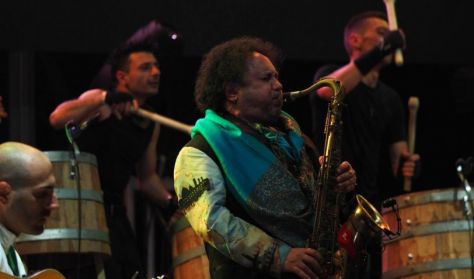 Naples-born saxophonist/singer Enzo Avitabile has always approached music in terms of rhythms, spending the first half of his career under the spell of soul and funk before moving on in 1996 to the more traditional worlds of Neapolitan songs, percussion sounds and world music.

Enzo Avitabile also famous for his collaborations (including with international stars), Avitabile has made his most successful albums alongside the barrel-thumping Bottari percussion band. Now, after their delightful festival appearances, we'll finally get to enjoy the experience at Müpa Budapest too.

Active since the late '70s, Avitabile released his first soul/funk album in 1982. This led to a successful phase of his career in Italy through the '80s defined by the nuances of this style, sometimes with a touch of jazz, afrobeat or pure dance music. On his second album, the saxophonist/singer worked with Richie Havens, and the rest of his career so far has revolved around making music together with others. He performed concerts with Afrika Bambaataa when rap first came into vogue, and with Mory Kante after moving toward traditional and world music from 1996. He also started working with the percussion band Bottari di Portico, with whom he has achieved his greatest successes and become a world music star in his own right, and almost all of the greats on the scene, ranging from Femi Kuti and Khaled to Manu Dibango. With the latter, he also gave a memorable two saxophonist-concert at the Sziget Festival, where he has performed four times. This, however, will be our first chance to hear him in a concert hall here in Hungary - accompanied of course by the completely unique rhythms of his main collaborators, the Bottari percussion band, as they pound away on wine barrels and tubs. Their ancient rhythms coupled with the fortissimo playing of the headliner as he presents his most recent double selection encapsulating his oeuvre are absolutely certain to shake the walls at Müpa Budapest.