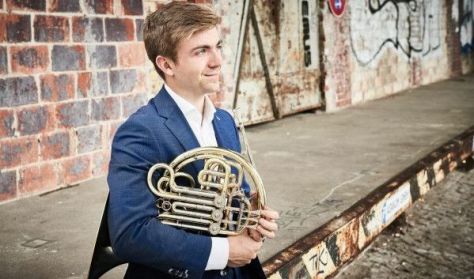 The horn is a tricky instrument. Which explains its fate in the history of classical music - rarely heard as a solo instrument or in a chamber orchestra. It instead tends to be used to add some colour to the orchestra, though you can also hear some brief - yet usually memorable - horn solos in operas and symphonic works. Now we can encounter a true virtuoso of this illustrious brass instrument, someone who can use horn to play just about anything. Ben Goldscheider graduated from the Barenboim-Said Akademie in Berlin in 2020, though by that date his career already resembled a real-life novel.

In 2016, at 18 years of age, the London-born musician reached the final of the BBC Young Musician Competition. In 2018, he made his debut at the BBC Proms, and also released his first album to great critical acclaim in the same year. He has appeared in concert halls of the calibre of Wigmore Hall, Queen Elizabeth Hall, and the Pierre Boulez Saal in Berlin. Despite his young age, he has already worked with a long list of ensembles, soloists and conductors, including the Aurora Orchestra, the BBC Concert Orchestra, the BBC Symphony Orchestra, the Britten Sinfonia, the City of London Sinfonia, the English Chamber Orchestra, the Lucerne Symphony Orchestra, the Manchester Camerata, the Prague Philharmonic, Martha Argerich, Sergei Babyan, Elena Bashkirova, Sunwook Kim, Michael Volle, Daniel Barenboim, Zubin Mehta and Mark Elder. He is a committed chamber musician and an enthusiastic promoter of new music. He will perform at Müpa Budapest as part of the European Concert Hall Organisation's Rising Stars Festival, which showcases talented young musicians. Ben will play works by Beethoven, Schumann and Vignery, in addition to the Hungarian premiere of a composition from the young English composer Mark Simpson.

Nominated for the Rising Stars programme by: Barbican Centre London.