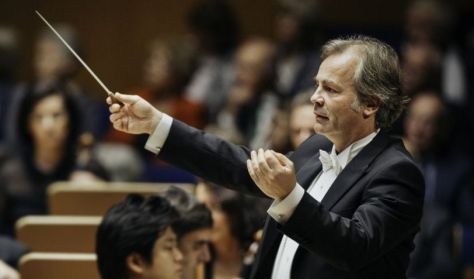 Although Wagner's mature masterpiece, which he wrote after Tristan but before completing the Ring, is officially a comic opera and doesn't stint on entertainment, it is nevertheless much more complex, dealing with youth and old age, love and friendship, art and craft, as well as innovation and conservativism.  more

Although Wagner's mature masterpiece, which he wrote after Tristan but before completing the Ring, is officially a comic opera and doesn't stint on entertainment, it is nevertheless much more complex, dealing with youth and old age, love and friendship, art and craft, as well as innovation and conservativism. Serving as a guarantee that these performances of the Budapest Wagner Days series will bring all the beauty of the work to the surface are both the first rate cast of singers and Axel Kober, the music director of the Deutsche Oper am Rhein, who has previously conducted in Bayreuth and speaks the Wagnerian style as his mother tongue.

For anyone coming to see Die Meistersinger von Nürnberg, there will be things to look at, things to laugh at, and things to think about. The Middle Ages in Germany; master craftsmen and other characters, both real historical figures and imagined ones. And, of course, there is also an allusion, a caricature, for we know that with the pedantic Beckmesser, Wagner is sardonically having his nemesis, the critic Eduard Hanslick, swept away by angry townspeople. The formidable Thomas Johannes Mayer, who will portray Hans Sach, has long been familiar to the Müpa Budapest audience, but the great German baritone, a former student of Kurt Moll's, receives similarly enthusiastic welcomes in Paris, Berlin and Zurich - and not only in Wagnerian roles, as he also sings Mozart, Weber, Verdi and even Berg and Hindemith. AJ Glueckert, the American tenor performing the role of the young Franconian knight Walter von Stolzing, is likewise versatile, at home in every famous opera house from Frankfurt and Florence to New York (the Met) and Tokyo. In addition to his Wagnerian roles (Lohengrin, Froh, Erik), he also sings parts in all kinds of styles, ranging from Pinkerton to Don José. The Hungarian audience welcomes the presence of Hungarian artists at every performance of the Budapest Wagner Days series with particular joy: this time around the production will be strengthened by singers like Gábor Bretz as Pogner, Polina Pasztircsák as Eva and Andrea Ulbrich as Magdalena.

Il signor Bruschino, ossia Il figlio per azzardo based on the opera by Gioacchino Rossini Szép

The two youths, Sofia and Florville, are in love. Their only desire is to finally be married. However, the girl's…