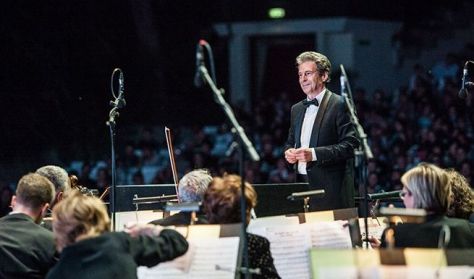 Film music concerts have become a tradition on the Budapest Summer Festival, where the 80-year old Open-Air Theatre gets transformed into one of the country's most beautiful movie theatres.  more

The series continues with its latest, possibly most epic installment with the Film Music Fantasy concert show as Nic Raine and the Budapest Symphony Orchestra present the most popular pieces of film scoring.

This season's program is characterized by fantasy and science fiction films where every generation will find their favourite epic stories. The concert will allow the audience to enjoy the enchanted melodies of Harry Potter, to take a trip through Middle-Eart with The Lord of the Rings or to travel through the land of Westeros (Game of Thrones) or the Hyborian Age (Conan the Barbarian).

The world of science-fiction will be represented by the most memorable space symphonies, including Jerry Goldsmith's Star Trek music and John Williams' legendary Star Wars music - but besides the main theme and the Imperial March, we'll get samples from the latest trilogy (such as The Force Awakens).

Finally, we naturally haven't forgotten about the superheroes sweeping through cinemas, including John Williams' Superman March, Danny Elfman's dark Batman music - and of course we can't forget about our customary surprise encore either.