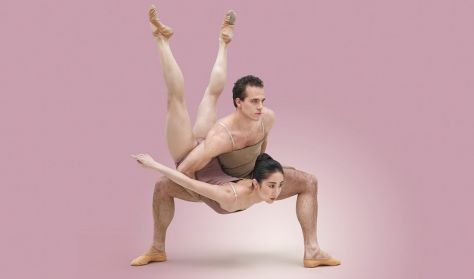 The contemporary repertoire of the Hungarian National Ballet includes a wide range of interpretation of the dance genre. Episode 31 (first shown in Budapest in 2019) by Alexander Ekman is a showcase for the energy of young, athletic dancers, feeding on their enthusiasm. Sharon Eyal and Gai Behar are among the most exciting, original creative pairs in contemporary dance. In the organised chaos that is Bedroom Folk, music, dance, and light each receive equal emphasis. The opening piece of the show, Wayne McGregor’s Chroma can be seen in Hungary for the first time. The production examines the drama of the human body: how the body is capable of communicating the extremes of thought and emotion.

“Often in my own choreographies I have actively conspired to disrupt the spaces in which the body performs,” says Wayne McGregor, and this is true of this dance piece of his that examines the dramatic possibilities of the human body and how it is capable of communicating extreme thoughts and emotions. Fusing with and augmenting Joby Talbot’s original arrangements of music from the American rock band The White Stripes is a spare and minimalist set designed by architect John Pawson. Since its 2006 London premiere, Chroma has been adopted by major European and American ballet companies. In the 2021/22 season, it also becomes part of the Hungarian National Ballet’s repertoire.

"Minimalism and anarchy, chaos and classicism."

Sharon Eyal and Gai Behar are among the most exciting, original creative pairs in contemporary dance. The Jerusalem-born Eyal was a dancer, and later a choreographer, with Israel’s exceedingly important Batsheva Dance Company before forming her own ensemble, the L-E-V Company, in 2013, with which she appeared in Budapest in April 2017. Her creative and romantic partner, Gai Behar, is a DJ and underground creative specialist in Tel Aviv. In 2015, they composed Bedroom Folk for the Nederlands Dans Theater (NDT 1), a piece that formed part of the Strong Language dance show. Music, dance and light each receive equal emphasis in the choreography, which is little more than half an hour in length. The creation, which blends clean, uniquely designed and exotic dance elements and operates with suggestive colours and lighting, has a captivating atmosphere which is both serious and silly at the same time.

“Episode 31 was created in 2011 for the graduating senior class at the Juilliard School in New York City. It is a large group piece consisting of a number of fast-paced scenes created by the dancers. From an upbeat drumming sequence to a quiet comment on beauty by Eric Satie, this piece is a showcase for the young enthusiastic energy of these very athletic dancers.” This is how Alexander Ekman explains the origins of a choreography that, after its New York premiere, was also shown in Edinburgh and also made it into the repertoires of the Finnish National Ballet and the Royal New Zealand Ballet. In September 2019, it becomes a colourful part of the Hungarian National Ballet’s modern repertoire.

"From youthful enthusiasm to quiet meditation: this is all dance."